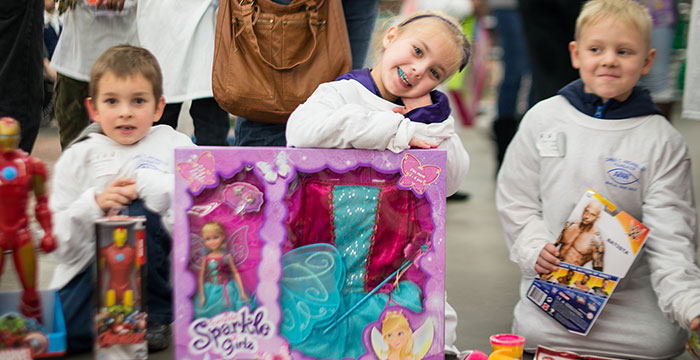 It looked like Black Friday on Sunday afternoon inside the Edinburgh Commons Wal-Mart.
The James C. Archbell III Foundation brought in more than 1,100 people for a holiday shopping spree, including approximately 800 measuring less than 4 feet tall who were bused in.

It was the ninth annual Kidz Kruz event, and though it may have looked like chaos to unknowing store patrons, everyone was kept moving for the nearly three-hour store event.

The children were picked up by charter buses at about 2 p.m. at their schools. When the buses arrived at the store about 30 minutes later, each school’s volunteers were led outside to meet the three children they were each assigned. The small groups then went inside to spend the $20 allotted to each student.

The eligible students came from seven Title I schools in Chesapeake and two in Virginia Beach.

The group with Jessica Young, a fifth-grade teacher from G.W. Carver Intermediate School, first wanted to look at video games.

The three boys from Carver swarmed a display of Xbox games and made their picks, but Young told them none could be violent. They put them all back. Gerson Cazun, 11, found one that fit the bill and kept it in his hand even after one of the other boys pointed out he’d have only $1 left to spend.

In another group, Jacoya Edwards, 9, of Crestwood Intermediate School, looked at clothes. She also told her volunteer she wanted to get a gift for her brother. Rather than puzzle out some ideas with her volunteer, Jacoya walked purposely to another display and held her choice over her head.

It was less decisive in the toy section, where the aisles teemed with activity.

A volunteer held a blue lightsaber high over his head as he led three boys through the crowd away from the aisle with baby dolls and over to the one with action figures.

Nearby, in the gardening and lawn section, a line wound its way through several aisles. It ended with Santa, who sat on a throne made of Coca-Cola products.

After checkout, the students loaded their purchases onto their buses and then returned to the store for pizza.

Carolyn Pedersen, an event organizer, said this was the first year they’ve had inclement weather. In the past, the kids had been able to eat outside. On Sunday, they spread out. Some went to their buses, and others sat on the floor in the auto parts section and in nearby, empty register lines.

Before wrapping up the shopping spree, Jay Archbell, the foundation founder, held a surprise drawing for the principals. Thurgood Marshall Elementary School won $1,000.

There were drawings on the buses too. Two bikes and two scooters were given away on each of the 16 buses.

Finally, with a police escort that included lights and sirens, the caravan headed to Virginia Beach for the McDonald’s Holiday Lights at the Beach.

The James C. Archbell III Foundation was created with the sole mission of providing opportunities for children in need in Hampton Roads. Read more »